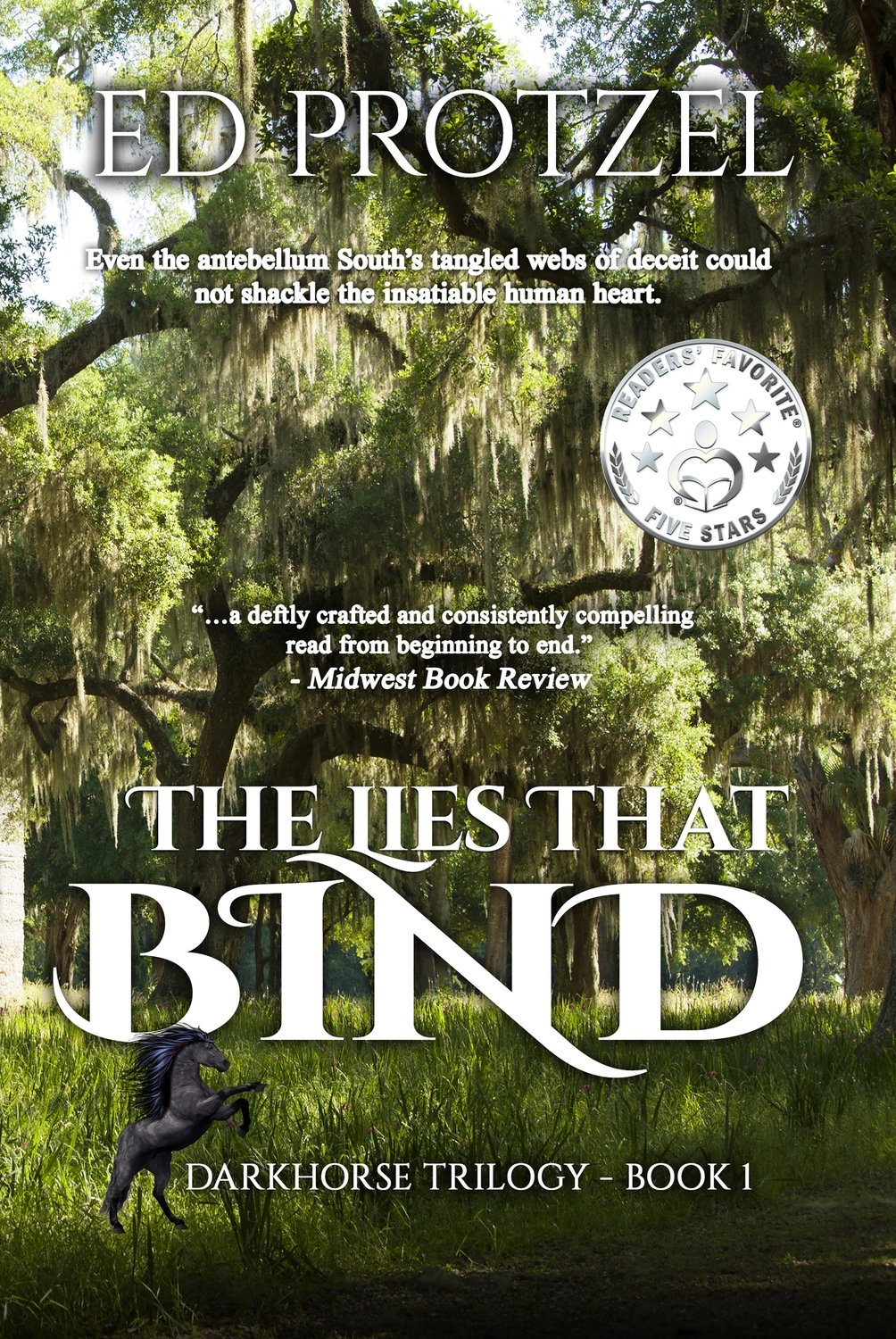 The debut novel of author Ed Protzel's 'Dark Horse Trilogy' series, "The Lies That Bind" is a deftly crafted and consistently compelling read from beginning to end. While strongly recommended for community library Historical Fiction collections, it should be noted for personal reading lists that "The Lies That Bind" is also available in a Kindle edition ($4.99). - Midwest Book Review, Small Press Bookwatch, Vol. 15, July 2016

...an entertaining and complexly plotted pre-Civil War novel about fairness and decency versus slavery and greed. Cotton, the South's money crop, also plays a large role in the story. There is an illuminating scene in a cotton broker's office that's reminiscent of how big business, especially hedge fund bankers, work today.

...One of the strengths of the book is in its vivid characterizations and the author's depictions of the natural world.

"The action and drama are compelling from the first page to the exciting conclusion. The animosity between the French plantation and Hurst builds to an exciting and surprising climax. Antoinette is so mysterious, one doesn't know of her mission until the end. Highly recommended, and I am anxious to read the next installment." - Historical Novel Society -Issue 77 (August 2016)

In this darkly ironic, multiple-mystery/drama, even the past cannot suffocate the insatiable human heart.

Driven by overwhelming longings, both the outliers and the establishment in this labyrinthine-plotted tale refuse to accept the roles society has forced upon them.

In 1859, Durksen Hurst, a visionary charlatan on the run, encounters a dozen hungry slaves stranded in the Mississippi wilds. Led by the deceptively simple-looking Big Josh, together, they agree to build their own egalitarian plantation, with Hurst acting as figurehead “master” to hoodwink the town. But wise Big Josh fears that Hurst's grandiose schemes may doom them all to the hangman’s noose.

In the town, the reclusive widow, Marie Brussard French, manipulates the region’s bankers and cotton brokers, everyone...except her frail, rebellious heir-apparent, Devereau. Driven by unbearable loneliness to mad acts, Devereau threatens to expose the family’s own tenuous façade—which would prove fatal to the Frenches.

Meanwhile, Antoinette DuVallier, a beautiful, Cassandra-like fugitive from New Orleans with mysterious ties to the Frenches, arrives on her own desperate mission. Her overpowering presence detonates long-repressed conflicts, unleashing a devastating upheaval of fire and blood that tears asunder the once-sleepy hamlet.